Roma people originate from the Punjab and Rajasthan areas of India. It is believed that their ancestors began emigrating from India approximately 1000 years ago and travelled through Asia to Europe, where many were enslaved. In order to survive, Roma groups migrated for centuries, but were eventually forced to settle under the communist regimes of Eastern Europe. They developed a nomadic lifestyle and  unique culture, which was not open to outsiders. Because of their continuous travelling and mistrust of, and by outsiders, Roma children did not attend school and literacy was limited - compounded by the fact that their ethnic language, Romanes is essentially oral and has only recently begun to be written down. Consequently, much of Roma history and culture is told through stories and song. Though there are different groups (clans) of Roma people, many speak Romanes plus at least one other language given their history of migration. Romanes has its roots in Sanskrit languages, and is related to Hindi, Punjabi, Urdu and Bengali. Over time Romanes has evolved numerous dialects, influenced by the adopted country and local languages.

The word 'Roma' was chosen at the first World Romani Congress held in London in 1971 and is now recognised across the EU as a way to describe a diverse range of communities, tribes and clans. Roma are often presumed to be travelling people when in fact the majority live in houses, and although they may share some characteristics with gypsies and travellers, they are essentially ethnically different.

Roma people faced significant persecution during the Second World War. They were arrested and placed in concentration camps, and many were sterilized under the law for the Prevention of Hereditarily Diseased Offspring. Nazi racial researchers put forward "scientific" reasons to persecute Roma people and the Nazis conducted a systematic Roma genocide within the concentration camps - a process known in Romanes as the Porajmos, or ‘The Devouring’. By the end of the war, an estimated 250,000 to 500,000 Roma had been killed - approximately three-quarters of Germany's Roma population and half of the Austrian Roma population.

There are an estimated 10 - 12 million Roma people living throughout Europe. The most significant populations are found in Bulgaria, Romania, Slovakia, Serbia and Hungary. In these countries Roma people make up 7-10% of the total population. They often face significant persistent deprivation, and are forced to live in Roma ghettos in conditions which have been likened to those in developing countries. The continuous stereotyping and racism that Roma people face means that children are often placed in schools for children with special educational needs, segregated from all other children. Their homes often have no running water and can be located next to areas of hazardous waste. Access to healthcare and employment is usually extremely limited, and relationships with 'authority' are generally tense and unsympathetic. Moving to the UK provides Roma families with opportunities and a lifestyle that many will not have experienced or thought possible. Adapting to this new way of life will take time to adjust for all involved. 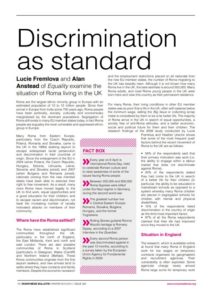 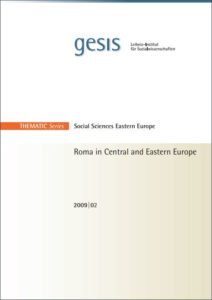